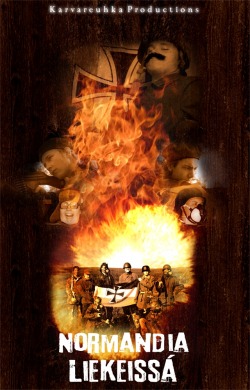 Normandy in Flames began festering in our minds in the Fall of 2006. The original story told a tale of two Finns, Urski and Timma, hopeless drunkards of Lapland. Their lovely day of drinking would be interrupted by the fearsome forces of Wurstland and its fearless leader Herr Gottler (yes pun very much intented). Lack of an actual camera and too much empty shoes to be filled, we grounded the project and it was to be a hopeless endeavour until Summer 2008.


The newly formulated plot centers around two British Commandos, Captain Camelot and Sergeant Davis and their fight against the German forces in Normandy. Normandy in Flames suggests that the Nazi Germany of WWII was not led by Hitler, but instead by a field marshal named Otto von Judenraus.
You can watch the film starting with the first part here: https://www.youtube.com/watch?v=N9Lf3HeMFIM

It's spoken mostly in bad English, but occasional horrible German pops up here and there. 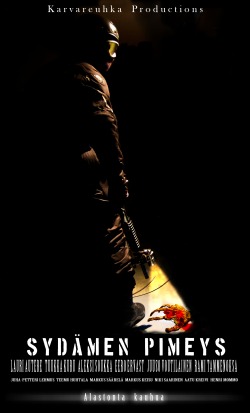 This movie began it's writing during the editing of Normandy in Flames. Our writer think-tank, Tuukka Kuru whipped up the idea of a horror comedy, which would take place in the inbred town of Jeesiö, Lapland, Finland. The Town itself exists in real life, but we shot the film in the surrouding sub-urban/farm area of Rovaniemi.

In the village of Jeesiö, a cozy inbred town at the outskirts of Lapland, there have occured strange deaths and the deceased have been seen walking in the darkness of night. Private Investigator Saku Haukka has been sent to investigate these odd occurences, but he is not the only stranger in town. A familiar gonzo journalist, Karpo, has come with his trusty camera man to study the ecomic situation of small municipals in Finland. These colorful characters are then thrown into crossfire between the spreading epidemic and a goverement elite task-force on "cleaning duty."


See the thriller at https://www.youtube.com/watch?v=uO4OYX10oEg

This here is spoken in Finnish, so foreingers be aware, not understanding the language makes this film even more nonsense, than it already is. 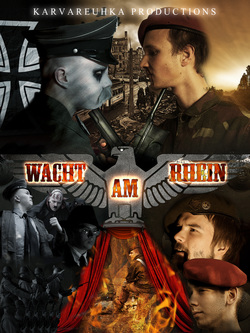 A sequel to the first film of Karvareuhka, Wacht Am Rhein began it's pre-production during the film crew's military service. The story was deviced in the Spring of 2010 and written mainly by Tuukka Kuru, Rami Tammenoksa and Markus Säärelä. The bitter disappointment in Darkness of the Heart (above) left a void in the crew, which longed back to the simpler times of WW2. Thus another chapter for Davis's story had to be done.
In 1945 at the eve of Germany's demise the Allied forces have run into a stand-still with the Third Reich. It is rumoured that the diabolical Nazis have invented a new kind of super weapon to turn the tide of the war, and who else but (now) Lieutnant Davis has the courage and cunning to best the nasty Huns? The answer: Pierre Poirot and his fellow partisans in the deep forests of Schwanzwald, in Netherlands. Throw in some Finnish volunteer SS troops plus an old foe and you've got a helluva package for classic pulp cinema!


This spectacle has also reached the netherworld of interwebs: https://www.youtube.com/watch?v=Xl5MVwjdsjE

The film is spoken in English, German and Finnish with Finnish subtitles. 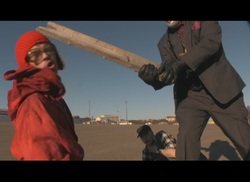 In May 2011, Karvareuhka took part in a Finnish short film competion called Uneton 48 (translates to "Sleeples 48"). The goal of the contest was to write, film and edit a one to seven minutes long short film, to which teams recieved a random genre (+ a line and a prop). We got to make a superhero movie.

Intense brainstorming, writing, rigorous storyboarding and directing coupled with devoted actors, produced "Sankari Solutions". A short of a private superhero company somewhere in Finland. Lead by the head honcho Saint together with his trusted companions Ottoman and Säärelä, Sankari Solutions is a crime fighting, damsel rescuing and yogurt eating league of heroes. The story begins when the trio's company is struggling to keep in business. Suddenly they get a call from the Emergency Center and are set out to solve a case of two murders in mysterious conditions. What devilry is behind the killings? What secrets does the Saint's mask hide? WHERE IS THE GARLIC? Some of these questions are answered in "Sankari Solutions: Director's Cut".

Tune in to the action here: ​https://www.youtube.com/watch?v=QYtDREInAe0
Big thanks go to Juuso Voutilainen, for awesome posters!