The group that put the A in the A-Team

So you want to hear about the guys behind and in front of the camera? Long story short, we like movies and making them. The first film to be made with original members of Karvareuhka, was a school project named "Mielensä Vangit" (such an epic, that it needs not a translation). Aleksi Soukka and Lauri Autere expirienced their first production, a video camera, from which material could not be uploaded anywhere and late nights at school property filming a horror movie. The creative spark lay dormant for a year or two until the idea for a nazi-killing comedy saw it's dawn break in 2006, and finally proceeded to production in 2008. We have since seen fit to spend the little money we have and all our spare time in making movies, good and bad alike. Here you can see introductions to some of our core members:

Lauri filmed his first, and still the coolest film "Timmy's life and deeds" with boys next door. At the time Lauri was 11-years old. The shooting ended, when the Thunderbirds-figure playing the lead part disappeared. In the Karvareuhka hierarchy, Lauri is involved a little bit in everything. Well mostly filming, editing and squabbling all the time. After breaking down due to the post-production of the last Karvareuhka masterpiece, Lauri dreams of moving onto house broken short films under 15 minutes in length. That in mind, he still manages to laugh at the jokes we boys conjure and raps up these epics for all nation to abhor. Anprotektiid seks kils!

Tuukka represents the nationalist side of Karvareuhka Productions, who works as the father and engineer of the movies' farce inventions. Originally the idea for the whole forming of the production team and Normandy I was born of the brainstorm of Tuukka Kuru and Henri Mommo in the summer of 2008. As in the other projects, Tuukka is the main writer of the stories and has built props and costumes for both of our first two movies. Tuukka has also for the most part handled recruiting extras, logistics and equipment.

A 20-year-old unemployed chump with a passion for war history and literature of the same subject, Markus is more than happy to create and build things. That in mind working with the scenery, props and wardrobe fits like a glove for him. For the most part he performes in different supporting roles. He derives his inspiration from Call of Duty and Commando Comics.

Normany flambé: Casual nazi, one of the minions of Otto von Judenraus, the caretaker nazi
Darkness of the Heart: Leader of the commandos, man behind the visual effects for the movie (although with variable quality)
Wacht Am Rein: ?!?

Juuso took part first in the creations of Karvareuhka Productions when making of Normandy In Flames began, in the roles shown above. In the next project he was the corresponding man behind the visual effects for the new project named Darkness of the Heart. He is the founder of the Northern Legend Productions and in that team also man behind VFX art. Hoping to participate to the Normandy In Flames II as much as time gives possibility, beginning from documenting the making of -process in the form of photographs and performing occassional cannon fodder parts. 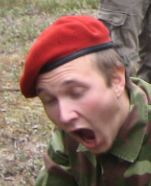 Henri sat down on a bench with Tuukka Kuru in summer 2008 to discuss an idea. That idea, after many many hours, became Normandy in Flames. After the main role in Normandy, he decided to have a smaller role in the second movie. Having spent one year in military service he makes a comeback in Wacht am Rein. Knows better than most that a movie is not done when the shooting is. Responsible for basic editing of the first movies and also taking part in the third one. Altough editing with friends isn't allways a walk in the park, Henri conciders Lauri Autere and Aleksi Soukka as an essential part of the team that connects the scenes into a movie.

Aleksi likes to think of himself as one the directors of the team. Although he would happily be the sole director, he cannot disregard Lauri as another creative powerhouse in the technicalities of filming and editing. Aleksi longs to diverse his knowledge in making films and in the future wants to study movies. Other than a basic idea of a dynamic flow of scenes and some sence in camera angles, Aleksi likes to act the most outrageous roles Tuukka whips up from his twisted mind.